What are the real benefits of equalities and diversity in the workplace beyond the sloppy, unsubstantiated generalised statements usually trotted out as ‘benefits’? Is there evidence to support the idea effective E&D brings competitive advantage and benefits to businesses?

I recently attended excellent training on equalities and diversity by Business In The Community, a business-led charity of the Prince’s Responsible Business Network that aims to encourage responsible business practices. The training aimed to give managers a greater depth of knowledge of legislation and skills to embed E&D policy.

Early in the training the slide below flicked into view:

“Because we have to!… and it also improves performance…”

And then glossed over as if that didn’t really matter.

I was almost taken aback; there’s actually evidence of E&D policy adding value and creating competitive advantage? Why have we never been told this before?!

Now I’ve been to several equalities training sessions, but this is the first one to claim there is actually evidence of the benefits of the implementing E&D beyond unsubstantiated generalised comments (see previous post).

I immediately halted the presentation, cutting off the instructors in my best ‘I’m the boss’ voice (because, you know, I am the boss) and bombarded them with questions:

Yeah, you heard me: Boss.

The instructors did their best to answer my questions with apparent limited knowledge: McKinsey and Company carried out the research. Companies performed “about 20% better.” It was “quite a big study.” It was published in 2015. Because “no-one has asked, we thought everyone knew this.”

The fact that this evidence was so readily glossed over was an indication to me that there is a massive disconnect between those seeking to implement and champion E&D, and the general workforce who, to a large extent I’ve found, are sceptics even in the public sector.

What evidence of benefits and competitive advantage of diversity is there?

And this is important, because middle-aged white males don’t have the monopoly on good ideas.

“Of course we believe in diversity, we have a very diverse investment strategy; we invest both yachts and planes. Now let the men get on with making the decisions.”

In my research I went back to the source: McKinsey & Company consultants were my first clue that E&D policy is more than just lip-service to an ethical ideal. 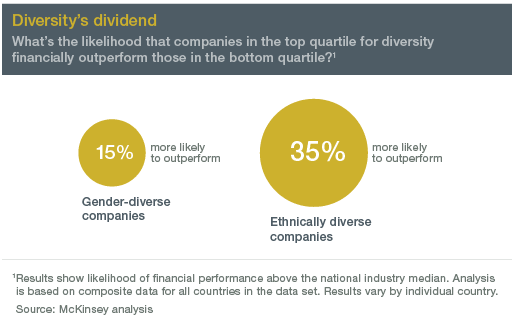 A summary of the research findings are below: 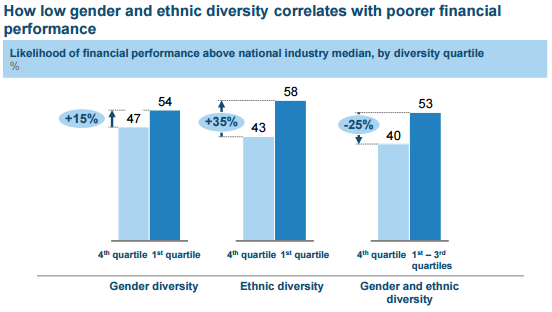 In the UK, it appears that simply greater gender diversity on senior executive teams leads to an earnings increase of 3.5% for every 10% increase in the number of female executives! If you offered a company that kind of improvement for anything, they’d snap it up.

Move aside middle-aged white men! It’s time to get productive!

Finally, some evidence to the claims of benefits. Of course all scientific and sociological research is open to interpretation and challenge; there must be hundreds of thousands of variables to this. Even in such a study as this, we need to challenge the underlying assumptions made in this research.

There are limitations of research on such a wide scale and the authors do admit that their results demonstrate correlation rather than proven causality, but the authors also claim there is a significant correlation between performance and diversity.

The use of the phrase: “more likely” in findings 1 and 2 indicate that a more diverse workforce/executive management team does not automatically lead to better returns, it just improves the odds – and that’s never a bad thing.

We can ask ourselves, does diversity encourage success or does success encourage diversity? Larger cities almost exclusively contain the greatest diversity in potential workforce as migrants are more likely to move to where opportunities are greatest. This further coincides with access to capital and markets that major cities offer and therefore benefit companies in these areas.

The authors use their conclusions to claim validity to some of our our ‘wishy-washy’ reasons of why diversity is important (as examined in previous post: why we need to do equalities and diversity):

“More diverse companies, we believe, are better able to win top talent and improve their customer orientation, employee satisfaction, and decision making, and all that leads to a virtuous cycle of increasing returns. This in turn suggests that other kinds of diversity—for example, in age, sexual orientation, and experience (such as a global mind-set and cultural fluency)—are also likely to bring some level of competitive advantage for companies that can attract and retain such diverse talent.”

I find, totally unscientifically of course, that when there’s a statement in research that includes the phrase: “we believe…” then you’ve probably found the weakness. It’s often the point where the researcher or author makes a leap in logic from research findings to what they seek to prove. It’s an imaginary bridge that can often indicate subconscious bias.

We’d get a better understanding of this if the report provided greater study into why these results were found. This is where it is lacking, it simply states that they believe these results are directly linked to our wishy-washy benefits and therefore lead to competitive advantage.

Further this study only looked at two factors, ethnicity/race and gender. There are 9 protected characteristics in the Equalities Act 2010, 7 of which aren’t looked at and we haven’t established benefits for.

Despite these research limitations which doesn’t prove benefits, it does demonstrate a widespread and strong correlation to organisational benefits that is a vast improvement on the unsubstantiated benefits previously examined.

This represents a great step forward in proving the case for diversity as a tool for competitive advantage, yet clearly more work needs to be done; we’ve barely scratched the surface in proving the value of a diverse workforce and senior-executive teams in adding value to an organisation. This question will be assessed further in the next post.

The important thing is that the case gets shared and promoted. We can’t assume that everyone agrees with the spirit of equalities and diversity, or with the assumptions that it adds value (I can assure you from experience, it’s not always accepted).

I’ve found the best way to establish a paradigm (or at least reduce dissent in our post-truth world) is to use strong, irrefutable research. We may not change everyone’s opinions but at least it may be enough to get the ball rolling in the right direction.

One thought on “The real benefits of equalities and diversity”

This site uses Akismet to reduce spam. Learn how your comment data is processed.